“Fulton Street is back in business” 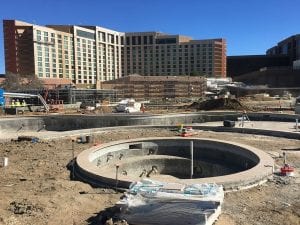 “That was the message of Fresno Mayor Lee Brand on Saturday afternoon as he officially launched the grand reopening of downtown Fulton Street, with thousands packing the narrow stretch of the street and crowds gathering at the Mariposa Street to celebrate.

The two-block section of Fulton between Fresno and Tulare streets that opened Saturday represented the final stretch of construction.…In all, 19 pieces of art, including sculptures and water fountains, were restored and reinstalled [by California Waters] near their original positions as the city worked to get everything ready for Saturday.

‘This has been a Herculean effort…’ [Mayor] Swearengin said…. She also thanked the hundreds of people who attended Saturday’s celebration of what she called ‘the rebirth’ of downtown Fresno.” Link to full story