As San Francisco’s new downtown gateway, the Salesforce Transit Center will greet tens of thousands of residents, commuters, and visitors daily, providing a dynamic destination while engaging, enriching, and connecting people coming and going throughout the Bay Area.

Four major works of art that were integrated as part of the Transit Center’s design were commissioned by the Transbay Joint Powers Authority and the San Francisco Arts Commission. The Bus Fountain, designed by Ned Kahn, represents one of the four public art pieces. It encompasses a 1,000 foot long serpentine, flush-deck, vertical water jet display that follows to the north side contour of the park.

A series of 219 fixed vertical water jets on the rooftop park are triggered by sensors that respond to the vibrations of the flow of buses on the deck below. A critical role played by California Waters was the programming of all the nozzles, jets and sensors. The frequency, motion and height of the jets correspond to the level of activity on the bus deck, making the arrivals and departures of the buses visible and tangible through their choreographed effect on the water.

“The fountain is like a huge musical instrument that is played by the bus drivers,” according to Kahn.

In addition to programming, California Waters provided construction management of this unique project and supplied both mechanical and electrical components as well as equipment and material coordination. Kahn’s artistic vision comes to life through a surprising and unexpected water experience that elevates waiting for the bus to a new high. 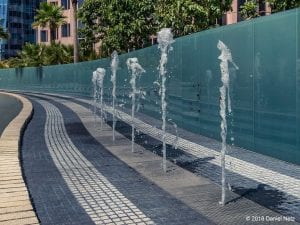 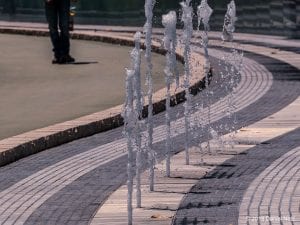 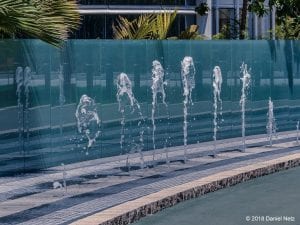 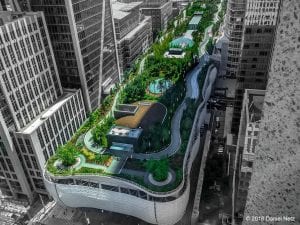